I’ve been to the library…five times?  I usually go about once a week, but I know one week I had to go twice because I had a request come in the day after I’d already been there. 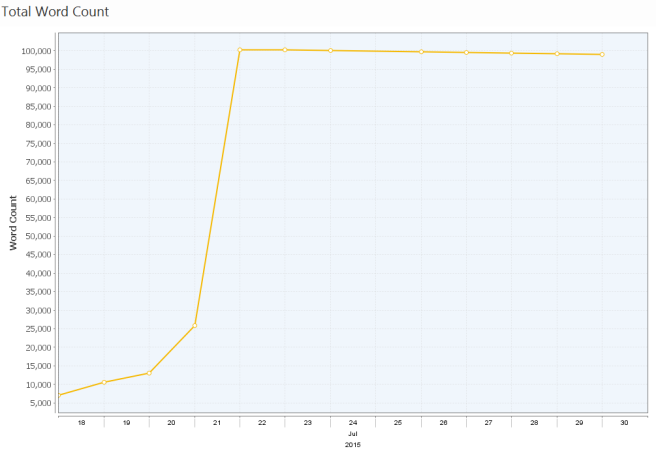 I’ve finished the first full revision of my novel, where I axed three chapters entirely but added four more new ones, and started the copy-edit.  (The July 21st spike is from importing all the remaining chapters to Quoll Writer on the same day–the first few days I was doing them individually as I needed them.)  The revised manuscript started at 100,258 words; with six chapters to go, I’m down to 98,822.  Part of me feels like cutting over 1,000 words is a lot, since I’m mostly taking them out one “that” at a time…but it’s just over 1% of my original word count, which makes it feel like I’m hardly cutting anything.

It feels good, though.  Look at that smooth line coming creeping down…yeah, I’m a graph nerd too.  Graphs satisfy my scientist-brain.

In the social media arena, I’ve joined Goodreads and just yesterday, Twitter as well.  I’m a total Twitter noob, but I feel like tweeting is a skill I can learn.  And just about every advice I’ve seen for authors on social media praises Twitter to the high heavens.  So I will learn.

So, despite the withering heat outside that makes me want to live inside my refrigerator, I am getting things done.  Next month I’ll have the copy-edit finished and sent the draft back to my beta readers (I could use a few more, anyone interested?); and while they chew on it, I plan to start digging more into the guts of the self-publishing world.   I’ve done some research–enough to know ISBNs aren’t cheap and it might take me a while to get a book cover I like–but there’s so much more to learn, I didn’t want to overwhelm myself with everything I didn’t know.  If there’s no book worth publishing, then I don’t need to know how to publish it, right?