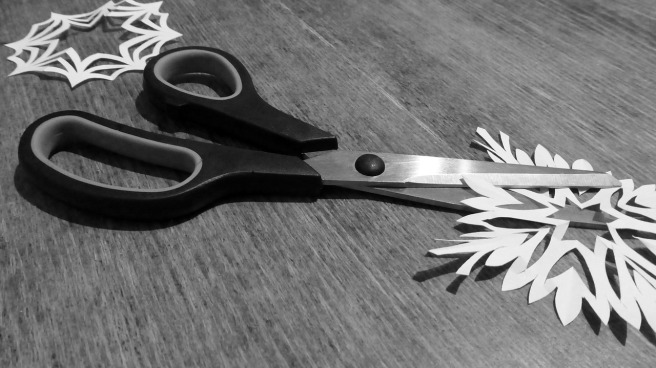 I was lying in bed, still half-asleep, my brain jumbled with random images from the dream I’d had.

I remembered seeing a window decorated with paper snowflakes. I thought about how badly mine used to come out when I was a child, because the scissors were never sharp enough.

Okay, so use an X-acto knife.

I’ve done plenty of work with a blade like that before, but I remembered even with the sharpest blade, my hand would shake or slip, and the paper would tear.

(Here’s where it gets weird.)

How does a cutting edge actually work?

In the obvious physical sense, it’s a fine (ie, sharp) object that a force acts upon to insert itself between two parts of another object, separating them. Like putting my hand into water, but in a more permanent form–the blade pushes the two parts to either side of it, but unlike water, solid objects can’t rush back together like it never happened.

But even the finest knife edge still has thickness, so my brain spiraled down to thinking about it on the atomic level.

Atoms are mostly empty space. Matter is mostly empty space–we perceive it as solid because those mostly-empty spaces have rules and properties about how they arrange themselves, and our senses are orders of magnitude too dull to notice the atomic trickery going on.

So on the one hand, it makes perfect sense that a sharp blade could slice through something easily, pushing all those tiny parcels of empty to one side or the other.

Then I realized the blade is mostly empty space too.

That’s when I got out of bed and made myself a cup of tea, because visualizing an X-acto knife made of hardly anything at all was too taxing for my sleep-muddled brain.

As a writer, I believe it’s important to give your mind time to wander down these odd little paths. Is this pseudo-revelation I had about atoms immediately useful to a story I’m writing? No.

But could I use it to inform the personality of a future character? Absolutely. I can already picture one–a young man with perpetually disheveled hair and an air of constant distraction, because he’s busy thinking Deep Thoughts and when he comes up with one, he realizes someone’s already had it, someone’s already figured that out, and he needs to read more widely and study more things so he can finally have New Deep Thoughts.

And I could play it straight and let him be serious, or he could be the weird one everyone makes fun of. Depends on the story.

So make a habit of daydreaming. Let yourself travel along unknown ideas to their inevitable conclusions, be they weird or obvious or downright foolish. Write those ideas down, if they amuse you, like my atomic X-acto knife did.

Give yourself permission to be strange, sometimes. It’s fun.