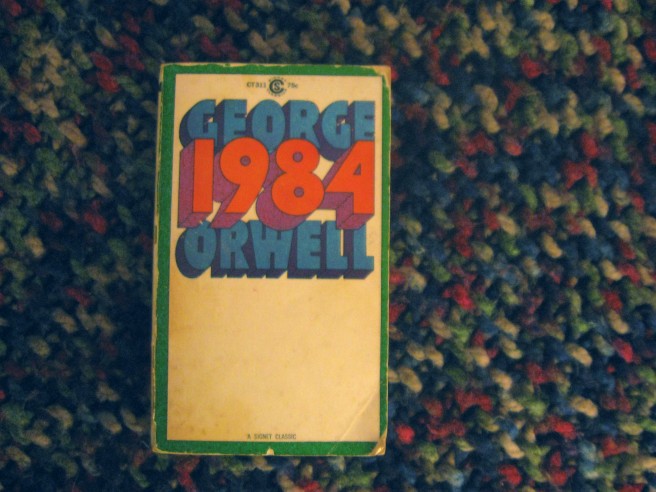 I read this first back in high school, not for class–I should’ve been so lucky–but because I was interested in trying out more “classics,” which varied wildly from this and Brave New World to Gone with the Wind and A Tale of Two Cities (which I hated, apparently I don’t care for Dickens.)

What makes a book classic is, of course, debatable, but 1984 earns its spot for me by presenting a hypothetical future (at the time) that was both terrifying and absolutely possible.

When I was rereading now, as an adult, what I kept thinking of was North Korea. So much of what I read about propaganda in this sounded just like what we know of how North Korea operates, albeit with a real dictator and not a mustachioed figurehead who doesn’t truly exist.

Where this fails for me, though, I’m better able to articulate now than when I was a teenager. Exposition dumps, the bane of much early sci-fi. I began to lose interest (again) near the end, where the story should have been escalating to some final confrontation or climax, we the reader are instead treated to a truly lengthy excerpt from a fictional book written by what turns out to be a fictional resistance movement. While I admire the twist, it’s a long slog to Winston’s capture, and then its followed by acres more of expository dialogue and the decidedly defeatist ending.

I don’t object to the lack of a happy conclusion–Winston is not a hero who overthrows the government, and it was clear from the beginning he never would be. But this novel is much more about ideas, about politics and its inherent discourse, than it is about characters and plot. It’s valuable for what it is, but it’s never going to be something I admire or imitate stylistically.