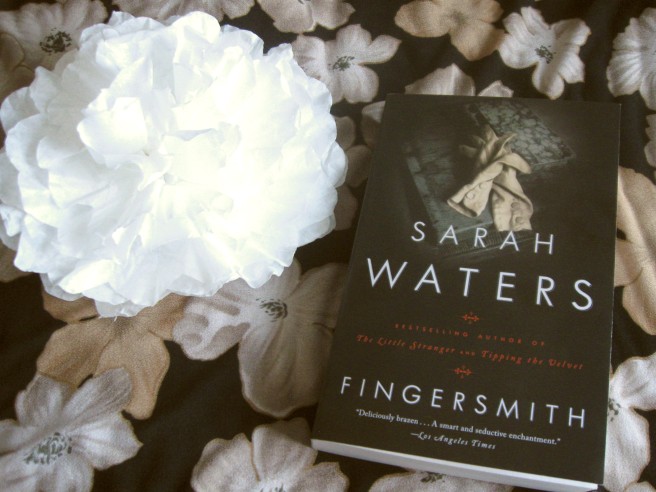 Perhaps my expectations of this should have been tempered by the oft-used term “Dickensian” in relation to this work, because Charles Dickens is one of my least favorite authors. But this title appears over and over on lists of wlw books worth reading, so I gave it a try.

I would have liked it much better if it had been about two hundred pages shorter–Dickensian, indeed.

Repetitive, not just for effect, but for melodrama. And the “love” part of the story was actually one of the weakest elements–both Maud and Susan were identically overwrought, with little personality beyond their wild mood swings, and basically no chemistry between them. The ending would have satisfied me better if I could believe these two women didn’t have more reason to love each other, than loathe. Because if I were Susan? I wouldn’t be so forgiving.

What I liked most, strangely enough for me, were the early plot twists. Changing first-person viewpoint in the middle because of one was a great and enjoyable surprise, but that’s also exactly when I feel the pace begins to lag. The section where we repeat events in Maud’s POV that had already happened in Susan’s should have been much shorter, ideally limited exclusively to anything Susan wasn’t present for, such as Maud’s private conversations with Richard.

However, I saw the final plot twist coming from miles away, and the big switcheroo in the past didn’t actually make much sense to me–I know that it happened, I’m not confused as to the particulars, but I don’t really understand why the participants felt it was necessary. So, between that and the lack of interest I had in a happy ending for Maud and Susan, the final pages fell incredibly flat.

Pretentious drivel. I only read the first of the three “interconnected” short stories, then the first ten pages of the second, before giving up.

My first complaint is the prose style. Since French is as guilty of long, clause-heavy sentences as English, I can’t pass off my gripes as potentially awkward translation–this was simply laden with meandering, incomprehensible sentences. And I do mean literally incomprehensible–early on, one sentence told me that the main character’s brother had died (“passed on” was the euphemism as I read it), but then two pages later, he’s alive again. I went back to check that I wasn’t mistaken, and after diagramming the offending sentence in my head in several ways, I finally struck upon a construction that showed me that a person had passed on news, direct-object style, not news that a person had passed on, ie, died.

THAT IS A HUGE MISUNDERSTANDING I SHOULDN’T HAVE BEEN ABLE TO MAKE. THIS IS FUNDAMENTAL FAILING OF WORDS CONVEYING THEIR INTENDED MEANING.

It never got better for me, after that. The repetition of seemingly meaningful symbols (how many times do I have to read the word “poinciana”?) never actually gave them any meaning. The viewpoint distance was somehow extremely internal, giving detailed emotional and historical flavor to every thought, and yet completely detached, because nothing about it made me connect to or care for any of the characters.

And finally, while I realize I didn’t finish the book, I don’t see how the first woman, the one I read about, was in any way “strong.” She’s miserable about everything, apparently unwilling to do anything about it, possibly being gaslighted by her horrible, horrible father about whether or not she lived where she lived (that was weird and I honestly didn’t understand the meaning or significance of that short exchange), and she’s forced into representing her incarcerated, not-dead brother for their stepmother’s murder. And I do mean forced, the prison guards know she’s his lawyer before she does. And what does she do? She goes along with it, even though her father manipulated her into that position. What’s strong about that?