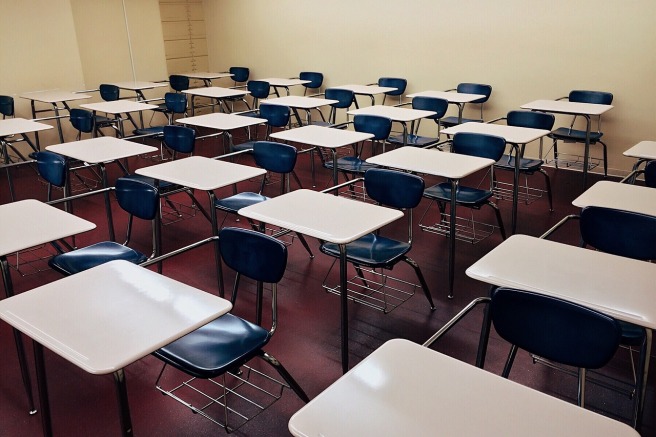 Early yesterday morning, I woke up from a nightmare.

I’d been taking a test. My high school physics teacher paced the front of the room, while all around me, the other students were talking. Nothing my teacher said would quiet them, and he was growing increasingly frustrated.

Behind me, a guy was alternately asking me for answers and mocking me. Beside me, my husband was taking the test as well, and he whispered, “Don’t say anything.”

But the students had gotten too noisy again, and finally, my teacher snapped. He ordered us all to turn in our tests and he would grade them unfinished. Then he left the room, slamming the door on the way out. (Not very logical on his part, but remember, this is a dream. Mine are rarely even this coherent, narratively speaking.)

Instead of taking mine up to the desk, as the others were doing, I filled in the blank bottom of the page I was on with a combined plea and complaint, that I should be allowed to finish the test or retake it, because I hadn’t done anything wrong, and collective punishment is a war crime.

Then I set my test on the top of the stack on the teacher’s desk and left the empty room.

I start to cry, and that’s when I wake up.

I’ve never believed in dream symbolism in any mystical sense. My dreams, weird as they can get, never seem so hard to analyze that I need to rely on something esoteric to understand them, like the idea that seeing a hamster in a dream represents “underdeveloped emotions.” (Yeah, I just googled that. Weird, right?)

When I woke, I took a few moments to examine the nightmare. An authority figure and a loved one conspiring to gaslight me while simultaneously denying me the completion of an accomplishment? I don’t need to dig very deep to see that dream was all about failure. I failed to finish the test, I failed to convince my teacher his treatment of me was unfair, I failed to find the support I needed elsewhere. (No real-life shade thrown at my husband, though–this is my subconscious talking, not at all an accurate depiction of him.)

With it all cut and dried before me, my next thought was, “Ursula would have this dream.”

Ursula is a minor character in the novel I’m failing to rewrite. Every day I should be working on it–every day, something prevents me. Not enough time. Not in the mood. A mountain of dishes, a string of errands that needs to be run, staying late at work, meaning to set aside half an hour to sit down and write but never quite getting to it.

Yes, Ursula would have this dream, and in a flash, I knew exactly why. I had already imagined her struggling with inadequacy issues because of her family, because of her mundane line of work clashing with her lofty ambitions of power and influence.

This dream I had, this nightmare of failure, has connected me to a character who otherwise is wholly unlike me. This is the small piece of my soul and my self that Ursula will inherit when I write her story. Because every character of mine gets at least one.

Having a revelation like this doesn’t entirely erase the underlying fear I have of failure. I’m not sure that anything ever will. But finding this small spark of inspiration has already pushed me to work again, when I had temporarily misplaced my motivation. It’s a small silver lining from a pretty big cloud, but you’ve got to take what you can get, however it shows up.