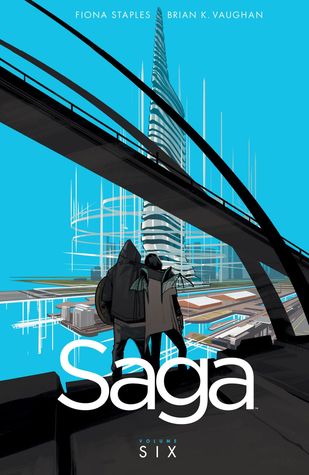 As usual, when I get farther and farther into a series I love, I find it harder and harder to write coherent reviews, as they generally become a list of highlights of my favorite parts. So here’s the list for the sixth volume: Ghus is still the best and I love him. I’m happy to see the reporters come back, even if I’m hesitant about what they’re trying to do because breaking Marko and Alanna’s story could be a triumphant ending or the beginning of everything going horribly wrong–it’s not like I can accurately predict anything ahead of time about a story this wacky, as the brilliance of its plotting is best visible through hindsight, not foresight. I definitely love that this series has always surprised me, and still is–Petrichor being an example, not because of the complexity of her identity, but because surprise! she’s on the ship now, and that’s a new conflict to explore.

What else, what else. I’m liking the kid Hazel is growing up to be so far, it’s charming to see her so trusting, given her unconventional and event-filled upbringing. I can see the beginning of her trajectory from unformed babyhood toward the narrator we’ve been listening to the whole time. And her reunion with Marko is just heart-breakingly adorable.

I love this series.

Stop stomping on my heart like this, please. That ending!

Some stuff I like from this volume: Petrichor keeps being interesting. Hazel’s first kiss. The line about unfulfilled relationships being “potential energy,” that hit me right in the gut. Also being punched in the kidneys by the multiple quiet tragedies that comprised the ending. On a lighter note, the cute little furry people of Phang were so adorable, and then, on a heavier note, that just made the ending hurt more.

Seriously, there are only two volumes left, so I knew things had to start going (more) wrong than they had been, but I’m really torn up about this!

But I had liked the first chapter, introducing Sara, just fine, so I figured I’d keep reading until the two future lovebirds met, and see if I liked the way Ash spoke to her. It was like he was a different person entirely, and somehow, I read the next two hundred pages in one sitting.

That isn’t to say this is an amazing book, because now that I’m finished, it’s really just a few thin character archetypes in a trench coat. Sara is the weepy but determined American widow, headstrong and occasionally foolish. Ash is the suave, charming British lawyer (as opposed to the rotund, bumbling British lawyer) who is used to getting what he wants and can’t imagine this widow standing in his way. His ex-wife Michele is the worst of the lot, a conniving French viper who has no heart, only machinations. Ash’s mother isn’t all that great, either, an interfering Mother Knows Best woman who takes every opportunity to scold her child, and her future daughter-in-law, into doing her bidding. When the story adds the little girl Alyssa to the mix, she’s entirely too lovable and perfect–her existence is a complication to Sara and Ash’s plans, but not her person itself, whom they both adore.

It’s all so, so slick, especially when this soap-opera worthy plots and lies and schemes are set against a crumbling French ruin in an otherwise idyllic setting. I read it so fast because there was nothing to grab onto to slow me down, nothing that ever gave me pause or made me think too hard.

And while the setting is romantic and there’s tons of tension between the leads, a great deal of that tension ends up being because Ash, both in a professional capacity and a personal one, spends most of the book hiding truths from Sara. Sometimes it’s outright lying to manipulate her (even though I can see, in his twisted lawyer brain, how he believes he was acting in good faith on Alyssa’s behalf) and the rest of the time it’s simply failing to give her relevant information in ways he sees as for her own good.

The conflict between them is so one-sided, and were I Sara, I could never trust him. It’s just not credible to me that she does, let alone falls in love with him. Or maybe I could grant that, for all his charming ways, but loving and trusting aren’t always the same thing, and when presented with the proof of his misdeeds, she forgave him when I would have slammed the door in his face. I’m not on board with that kind of romance. 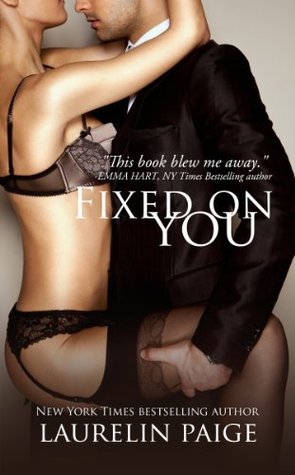 This book came to me as a full-length bonus novel attached to another Paige work that I was surprised how much I enjoyed, so I was on board with reading more, even if it was an entirely different series.

Sadly, I can’t say I enjoyed this one nearly as much.

And then he “hires” her to be his fake girlfriend, but they’re still going at it like rabbits “off-duty.” I mean, there’s compartmentalization, and then there’s this nonsense. He wipes out Alayna’s student loan and credit card debts as payment for her “work” as his fake girlfriend, but somehow that’s not paying for sex, just because the sex isn’t part of the arrangement and they’re doing that separately? No, no, I don’t buy it. Especially when she specifically says “no sex today” on one of their dates, and he comes into her dressing room and screws her anyway. It’s not depicted as rape, but Alayna’s internal monologue states something like “I never said no, but he never asked.” UH YEAH YOU SAID NO WHEN YOU TOLD HIM NO SEX TODAY AND HE AGREED.

So Hudson doesn’t respect clear boundaries, yet that’s okay somehow, because that’s Alayna’s entire character. She’s had therapy for her obsessive relationship issues, so from the very start, it’s a terrible idea for her to get involved with a man she finds attractive and wants to bang but who assures her that he’s not capable of love so they’re never going to have a real relationship. A smart woman would have walked away, but Alayna needed the money, and I feel that (except that the threats from her brother about cutting her off financially never actually materialized later so she never struggled for anything…you know, her entire motivation for agreeing to this scheme.) And, big surprise, over the course of the story she fixates on Hudson and falls in “love” with him. I’m putting that in quotes because even at the very, very end when Hudson realizes that weird feeling he’s feeling must be love, they don’t act like they’re in love, they act like they’re in lust, and anything approaching tenderness instead of passion just falls flat.

It’s a train wreck of a relationship that’s held together with lots of sex and not a lot of anything else.

One technical issue that I don’t usually need to bring up: I was reading the ebook version, so I have no idea if it carries over the print books, but I had great difficulty reading the font chosen for the journal entries, and they weren’t the majority of the book, but definitely a significant portion. I increased the font size on my reader, which I rarely need to do, but it didn’t really help, because my comprehension problem was with the extreme slant of the font. Eventually I got used to it, but it definitely detracted from my reading enjoyment.

Now, about the story. I dig post-apocalyptic fiction in general, and I enjoyed a lot about this–a PA world viewed entirely through the lens of female sexuality and reproduction? Sign me up! It explores more types of male-female relationship dynamics than just “all men devolve into rapists because of the scarcity of women,” though that is the major dynamic we’re exposed to in the beginning of the story. It’s a grim and frighteningly possible world, but it’s not all bad out there in the wilderness.

What I really want to talk about, though, are the things that kept this great book from being amazing. Font issues aside, the journal entries sometimes didn’t make complete sense to me. The protagonist’s tendency to shorthand with plus and minus signs is perfectly understandable in theory, but I didn’t always follow the meaning of the more esoteric word equations she laid out with them. Then, I had trouble tracking how long the story had been going on, despite the dates given (or guessed at) in the journal, because every few chapters it seemed we were jumping forward in time to hear the end of the story of some side character that was being written out of the main plot. While I enjoyed some of those moments of closure, they did break up the flow of things, and trying to track how long it had been since the plague got confusing. I think the information was there, if I’d been taking notes, but that’s not something I generally feel like I need to do for a book I’m reading for enjoyment.

My last quibble is a larger and more personal one, because the unnamed protagonist is clearly bisexual, but we have a case of The Missing B Word. The midwife says to one companion, who asks if she’s a dyke, I mostly dated women but my most serious romantic relationship was with a man, so whatever you want to call that. (I’m probably paraphrasing slightly, I have a terrible time getting quotes verbatim from memory.) She won’t call herself bisexual, when there’s basically no other way to read it. I cringed, waiting for the “I avoid labels” line that media creators use so they won’t have to use the dreaded B word. It didn’t come then, but the attitude behind it comes up again late in the story with a journal entry from a man who ends up paired up with another man, a more effeminate one who doesn’t mind living as a woman in their relationship, but the first man doesn’t feel comfortable calling himself “gay” and writes that the midwife says he doesn’t have to call himself that if he doesn’t want to. Which is true, of course. But there’s a difference between portraying a character that obviously has internal issues with the word “gay” and struggles with self-identification because of those issues, and just breezing right past the issue of explicitly naming the protagonist’s sexuality. Bisexuality gets so little good representation in general, and then even when it’s present, it often goes unnamed, and here I just don’t see the point of pretending it’s ambiguous or defying labels when it’s just not. The midwife has dated men and women. She’s slept with men and women. Since the narrative is never about her struggling with how she feels about her sexuality, how she’s dealing with being bisexual (or not,) I don’t see any reason she shouldn’t call herself bi, and I’m angered by that lack of affirmation, because it’s something my community is so often denied.