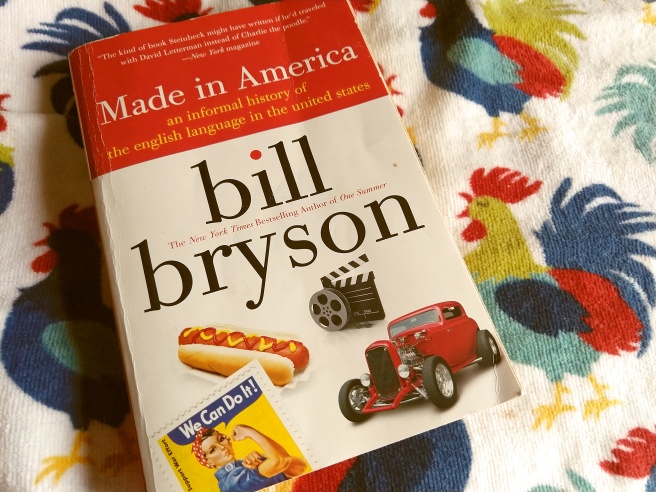 #44 – Made in America: An Informal History of the English Language in the United States, by Bill Bryson

I’ve read a few other Bryson works and been favorably impressed, and I’m both an American and a word nerd, so this seemed right up my alley.

But it disappointed. Though it’s obviously well-researched and I applaud it for that, the tone straddles the line between Bryson’s usual humor and serious scholarly engagement, which is a whiplash-inducing pairing. In addition, that humor, especially in the first half, took on a strongly condescending “so you thought you knew American history but you were wrong” attitude. Yeah, Mr. Bryson, the public school system in much of the United States (especially in the ’90s when this was written) teaches us a deeply editorialized version of events canonized as truth but only tenuously related to what facts we do have. (And I’m not even just talking about the racism inherent in both slavery and our historical relationship with Native peoples, which are both mentioned only briefly. I knew that was sanitized. This was more of a “every historical figure you were taught to revere didn’t do half what history claims they did, and/or, they were terrible people.”)

I don’t think Bryson was deliberately setting out to make his readers feel idiotic or uneducated, but that’s how I felt in the early chapters every two or three minutes when yet another thing I was taught was debunked. Being beaten repeatedly with a “stupid” cudgel isn’t any fun, especially when a lot of it didn’t seem to enrich the narrative of “this is how American English evolved.”

That issue faded as the book went on, but the more modern chapters settled into a rhythm of a few paragraphs of notable history followed by a half-page paragraph of dense word listing, showing the date which new words and phrases entered the American lexicon. This is where the well-researched bleeds into over-researched: I’d never heard of half the words or expressions listed, sometimes more depending on the subject of the chapter. Is it that useful to mark the entry of a phrase into the language that no one still uses, at least for the layman audience? I’d rather find out about expressions I know, and there were plenty of those, but a lot of the rest was dead weight.

That dead weight made a 350-ish page book of nonfiction, something I can usually read in two days, into a slog four days long that constantly tempted me to give up. But I did enjoy some of the later chapters more than the first half of the book (particularly the chapters on food and sex, go figure.) So this wasn’t a total loss, but it was definitely the worst Bryson book I’ve read so far. 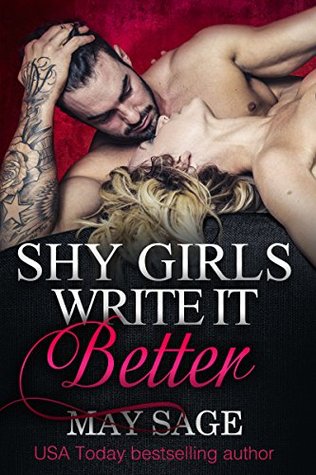 A really cute premise with charming characters, but unfortunately the story was incredibly rushed, hamstrung by the novella length.

Now, the Kindle edition I read lists the page count at 182, but the end of the story fell at 80%–the rest was composed of samples from the author’s other works and similar end matter materials. So chop nearly forty pages of story off that length. Also, rather than standard paragraph formatting as in print, the paragraphs were separated by blank lines (as is common in website text, like this review, for example) which further padded the page count. I wouldn’t actually care about that, if I didn’t think this story when from zero to happy ending in a ridiculously short period of time.

What do I mean by that? Well, I was invested in these characters pretty well for a novella, their interactions were downright adorable, and their dynamic subverted some pretty well entrenched gender roles–for example, it’s the man who decides they’re going to be friends instead of lovers at first, despite their obvious mutual attraction. Everything is going along pretty swimmingly, then all at once the story takes a trope-laden roller-coaster dive. When they hop into bed together for the first time, he’s taking her virginity (a), without a condom (b), while thinking about how it’s totally fine if he gets her pregnant because he’s baby mad and wants a family with her (c), even though they’ve only been dating for about ten seconds (d).

(a) + (d) I would be okay with separately, or even together, because maybe she’s absolutely ready to ditch that virginity even if they hadn’t been dating very long. But (b) + (c) are ridiculous/unsafe/abusive/toxic behaviors that I’m frankly disappointed this otherwise reasonably charming romantic hero decided to engage in. Functionally, that whole scene is apparently supposed to convince me how in love with her he is, how happy their ending is going to be because he’s so passionate and committed, but honestly I think it’s just gross to want to get your brand new lover knocked up immediately, and without discussing the possibility of children with her at all beforehand. Accidents happen, that’s one thing, but this is him just not using protection knowingly, asking her partway through if she’s on birth control, then going on anyway and telling himself it will be great if they have a baby. (They don’t, the denouement points his disappointment when she gets her period, and he basically says to himself “well maybe next time.” /shudder)

So the first 60% or so is a solid three stars with potential, then the rest is one star at best for how rushed and cringey it is. 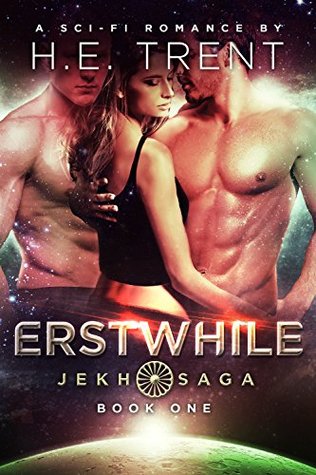 A lot of wasted potential.

I don’t read a lot of sci-fi romance, and this particular work felt heavy on the sci-fi/politicking and light on the actual romance, but that imbalance may be actually just a different balance than I’m used to because of the subgenre. Sci-fi takes a lot more world-building space than contemporary or military or half a dozen other subgenres, so this criticism could fall under “it’s not the book, it’s me and my faulty expectations.” I honestly don’t know.

What I do know is that the world-building here is full of holes, starting with the time period it’s set in. This was published in 2016 and set in 2036. That’s twenty years out, yet apparently Earth has colonized another planet, and we’ve been there for at least a while, presumably longer than twenty years, based on the level of devastation we’ve inflicted on the native population, and the fact that the lead’s grandfather was a political agitator in the past about the colonization. (If there were hard dates given to the timeline, I honestly don’t remember them, but this didn’t feel “new” as it was happening, it felt like they’d been at this a while.)

So am I supposed to believe this is our Earth, our society that’s doing this? Because we’re not. This isn’t set far enough in the future to be a believable course of events, and if it’s supposed to rely on some alternate history where the story Earth diverged somewhere in the past and this is their future, that alternate history is not given.

Okay, so my brain pushed it farther into the future to get past that, because hey, does it really matter? It’s just a year number, right?

But the holes just keep coming. The native population was brutally crushed under the weight of colonial boots, apparently, but the fugitive men we meet and who become the protagonist’s lovers have a surprisingly deep awareness of some aspects of human history and culture, odd things that my brain kept bumping into and saying “How would they know this? What human taught them this?” And they know English and some German (apparently, it comes up once and is never mentioned again) but I never saw any evidence of the sort of formal schooling that would teach them that (they’re really fluent, this isn’t a “pick up it from the oppressors while I’m fighting to survive” kind of knowledge) and it’s all just hand-waved.

Then, let’s talk about the “romance.” I have never read any romance novel where consent is so unclear. Courtney really just does sort of fall into bed with one of the men, and yes, we the reader know he’s sick because of a hormonal imbalance that female pheromones will alleviate and eventually cure, so we know why he wants to bang her. But she never really says yes, and during that first scene and several following it, Courtney asks him (or later, the other man in their pairing) “What are we doing?”

It keeps happening, this bewildering sex they have without any sort of discussion or boundary-setting or even emotional attachment. It’s strange and uncomfortable and not particularly sexy to read, because I was as bewildered as Courtney. Yes, it’s established she finds both of them attractive physically, but there’s never really much of an emotional connection, and at one point Courtney even questions if it’s appropriate for her to “use” Murk for sex because she’s a colonizer and he’s a native. Which, yeah, dicey dynamic there.

But I called this wasted potential because the bones of a good setup were there. I wanted to read a story where these two men were suffering doubt about their attraction to Courtney: is it just their biology, are they that desperate for pheromones, or is it something beyond that? Could it be real? And I think that might be what the author was going for, but I never thought she got there. An unplanned (and supposedly impossible) pregnancy happens instead, so suddenly they’re all stuck together whether their relationship would have developed naturally or not, because (newsflash) the dominant male partner in Jekhian trios are biologically baby-crazy and territorial as all get-out.

There were moments, when the three of them were trying to hash out their cultural differences and what it meant for their expectations of relationship and family dynamics, that I keenly felt that wasted potential. This could have been so, so good, if it hadn’t fallen into the baby trap as a shortcut to keeping them together, if it had explored the power balance among them with any kind of nuance, if it hadn’t relied on keeping one character mute for most of the book because he was the one who could have explained Jekhan culture better than the one who could speak, which fueled constant and repetitive misunderstandings. (Side note: that muteness was handled poorly, which couple with a great deal of head-hopping, meant that a lot of times I honestly wasn’t sure who was speaking/thinking any given line. So that was no fun and did not help matters any.)

I did not like this book at all, but I’m left with a wanting feeling to read the book it could have been, because I think I really would like it.